Getting Your Cat Spayed or Neutered: What To Expect When Having Them Fixed 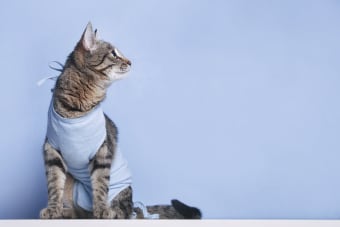 There are a number of health benefits that go along with having your cat fixed. Our Fairhaven vets discuss why you should have your cat spayed or neutered and what to expect from the surgery to have them fixed.

When Is It Best To Have My Cat Fixed?

Your new kitten can be spayed or neutered as young as six to eight weeks of age, however, it is more common for kittens to have spay and neuter surgeries when they are between five and six months old. Generally speaking however it is completely safe for a healthy cat to have these surgeries performed during any stage of their life.

The Difference Between Spaying & Neutering

What Are The Benefits Of Spaying & Neutering?

It is recommended to have female cats spayed before their first heat as they will then have a reduced risk for malignant mammary tumors later in life.

Spaying also functions as preventive care by helping to reduce your cat's chances of developing possible infections of the uterus, and of developing cancers of the reproductive organs.

Undesirable behaviors in female cats can be reduced with spaying, including; increased and overly intense affection, intense rubbing on objects, marking territory with urine, the desire to wander and heat-induced howling.

Neutering male cats also offer a number of benefits. It reduces unwanted behaviors such as cat aggression and roaming which can help to reduce your cat's risk of injury.

Your male cat's risk of developing testicular and prostate cancer are also reduced with neutering.

In the US, cat overpopulation is a serious and widespread problem. By having your cats spayed and neutered you are helping to reduce the number of unwanted cats in your area.

More cats are born each year than there are homes available for them. Homeless cats frequently wind up on the streets, and can ultimately end up being euthanized in shelters.

By spaying or neutering your cat, you are helping to reduce the rates of cat homelessness and euthanization in your area.

New England Animal Hospital is accepting new patients! Our experienced vets are passionate about the health of Fairhaven companion animals. Get in touch today to book your pet's first appointment.